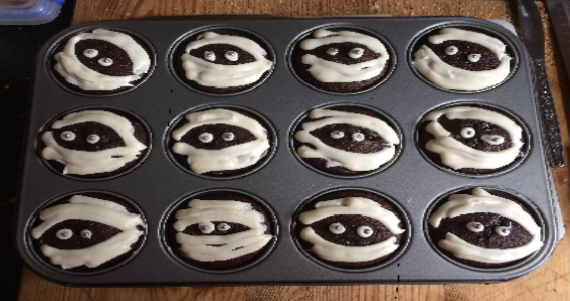 Hallowe’en and Bonfire Night are nearly upon us, and whether the thought chills you to the bone or puts a rocket up you, there’s no need to be a damp squib! There’s plenty to be making and baking, for everybody to enjoy.

I used to enjoy carving pumpkins for the kids but even though those days are gone, at least they’re readily available and quite cheap at this time of year. Handy safety tip I got from daytime TV was to make a hole in the bottom of the pumpkin to hollow it out before carving, rather than cutting off a lid, so you can then pop your lantern on top of the tealight instead of trying not to singe the hair off your hand as you lower it in! Secondly, the pound shops and supermarkets now have cheap LED tealights, which are a lot safer and just as effective, plus you don’t get the smell of burnt pumpkin lingering in the house for days.

Anyway, public safety announcement over, let’s look at food. I haven’t made them yet but I do think these spooky witches’ fingers look really simple and effective, with their almond nails.

I made a batch of these gooey chocolate Mummy buns last week. They are so moist and tasty, but I know I won’t win any prizes for decoration!!! My buttercream icing was a wee bit too soft, I think.

The recipe is here, anyway, if you want to give them a go. You obviously could leave them plain, or decorate them differently if you don’t want the Hallowe’en theme.

Going back to the pumpkin, don’t waste what you hollow out from it. You can roast pumpkin cubes alongside other veg, or substitute for butternut squash in risotto etc. of course, but my personal favourite is a pumpkin soup with chilli. When well cooked, and liquidised, it has a lovely velvety texture, however I feel it needs the chilli kick and I also use veg stock, as it isn’t massively flavoursome on its own.

I have tried pumpkin pie in the past, which most people think of first, but be wary! The first one I tried was really terrible, as it was very dry, fibrous and had little taste. I then tried a true American version, which is like an egg-custard-come-quiche. That was much nicer but a bit of a heart attack on a plate, being full of sugar, eggs and cream – anything to give the pumpkin flavour, in fact!

If you have time on your hands, you can clean off the seeds, lay them on a baking tray and roast gently. They can then be sprinkled on salads or in home-baked bread. They are very good for you but it’s a little bit of a faff, in my humble opinion.

Today, however, I am mostly making parkin. I have made ginger cakes etc. but never actually tried making this before – probably because you can pick a chunk up for £1 in most places! Like bread, however, I am hoping that it will be different/better for being homemade.I chose this Lancashire recipe, and will let you know after it’s rested in a tin for a few days. Am also planning to do some black peas. Tried them before but they were dry and disappointing, but I have some Hodmedod’s Black Badgers this year, to try. My mouth’s watering, thinking about vinegar now. Again, watch this space or please feel free to offer tips, as I am not a native Northerner, so probably not got the knack yet.

I shall leave you with a picture of the parkin, fresh from the oven, to whet your appetite. Whatever you do, have a great time, have a safe time, keep your pets in and send photos if you have a go at any of the recipes!