The opera house is a grand old venue, the kind of place I would have loved to be able to visit to see bands like The Rolling Stones, The Eagles and obviously The Beatles.

As the title of the show suggests, “Let It Be” is the story of The Fab Four from Liverpool. But its much more than that. The set is designed to replicate the 60s media of black and white TV, and the wireless, and when the stage is being dressed we are treated to interviews, announcements and TV clips relating to the era the show is depicting.

The first time we see the band, they are in the iconic Cavern Club. The set and portrayal is made by the small details such as the cigarette in Ringo’s mouth, the smoke filling the set and the familiar scouse banter from John. 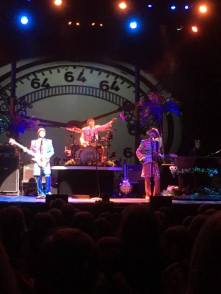 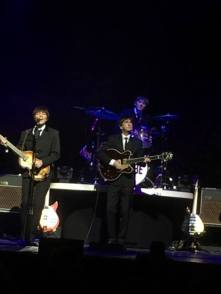 The songs begin straight away and throughout the whole night there isn’t one hit I didn’t recognise from the get go, and I left wishing they had been able to perform more. The show visits the settings of their meteoric rise to super stardom, touching down in the first half at The Royal Variety Show and The Shea Stadium.

Again, the set design doesn’t disappoint, with an array of modern lighting and projection setting a realist and believable image of the band. The lads on stage don’t break character either, from Johns antics and Paul’s sensible charm to George’s guitar solos and Ringo’s head bobbing.

By the end of the Shea Stadium set the whole Theatre were on their feet, twisting and dancing, singing and screaming. The Magical Mystery Tour concludes the first half, with a fantastic array of lighting and smoke creating a surreal backdrop for hits like Lucy in the Sky with Diamonds.

Between sets we are treated to the absurd, yet genuine, adverts of the swinging sixties, such as Capstan Cigs, 007 Aftershave (Licence to kill…Women) and many more.

The costumes for the Boys are amazing in their detail, which is particularly obvious in the Sergeant Pepper and Magical Mystery Tour sections. Bright, Vivid and colourful costumes, true to the original articles, compliment the skill of the musicians perfectly. Alongside the wardrobe, the facial hair department worked overtime to maintain the swift changes and sometimes subtle tweaks to hair and moustaches.

The lighting effects are worthy of note all on their own, creating projected images, surreal sequencing and a realistic atmosphere. The instruments that the Performers used were so true to the time, and beautiful to behold. There were lots of guitar and instrument changes between the band, as happened with the original Fab Four. From acoustic to electric, piano to keyboard, drums to maracas. In particular, George Harrison’s weapons of choice we stunning to behold, and the Guitar used by john later in the show was absolutely fabulous.

In the second half we were expertly driven through the White Album, Abbey Rd and some individual, acoustic numbers. When John appeared and began to play Blackbird, we were amazed with the integrity and authenticity of the performance. Joined on stage by George with “here comes the Sun” and John singing ASK DHARMA it felt wrong to leave Ringo without a solo and he didn’t disappoint with a crowd pleasing rendition of “Yellow Submarine” When my favourite Beatles song, Come Together, was finally performed, I got so excited I jumped the gun on the chorus, a point John’s alter ego was happy to point out – “Wait for it” The relaxed and nonchalant way the band left the stage, and the long gap they left while the crowd demanded “We want more,” was reminiscent of the beatles own confidence, and they didn’t disappoint with a a foot stomping rendition of “Let It Be.” John’s demands for “torches from a mobile phone, whatever that is” wasn’t lost on the older guests, and some of them went full on retro by waving their Zippos in the air.

Another encore was guaranteed when we realised which obvious hit they hadn’t yet done, and I’m sure you guessed which song they left us with. Hey Jude was passionate, interactive, enthralling and absolute full on musical dreamery All in all, this is by far the next best thing to actually seeing The Beatles. For me, the musicality of the cast, coupled with the attention to detail makes it a show I will go to see again and again.

For more on the Let it Be UK tour visit