I haven’t blogged about food for absolutely ages! I still nearly always cook from scratch, but usually it’s just day to day stuff so not much to write about, quite literally. Even my home bread making has dwindled to nothing, which I’m disappointed about, however its summer now and the calls on my time are a bit less, so I’m getting the cooking bug back!

If you cast your mind back to May, we celebrated Love Your Local Market fortnight, which was created to raise awareness of the wonderful local (and diverse) produce available in our local markets, and to encourage customers to shop locally and support small businesses. While I think about it – don’t forget that next Saturday is the market’s Summer Fun Day, from 11am – 4pm, so it’s a great time to check it out, if you haven’t been for a while.

Anyway, I blogged about my wonderful purchases from Bolton Market at that time, and how much deliciousness could be derived from one bargain box of tomatoes, and I was lucky enough to find myself the winner of the national #marketbasketchallenge, which meant I also won £100 to spend at Bolton Market, which was an even bigger surprise!

I duly trotted along this weekend to see what was on offer and the challenge this time was actually spending £100. We started by visiting Great Ale where we picked up a few craft beers and I couldn’t resist a bottle of refreshing Lucky Buddha beer (okay, I admit it had me at the funky Buddha moulded bottle…) and followed this up with a seemingly rather random purchase of a yard broom, although it’s something we needed and it reminded me that you can buy just about anything there. 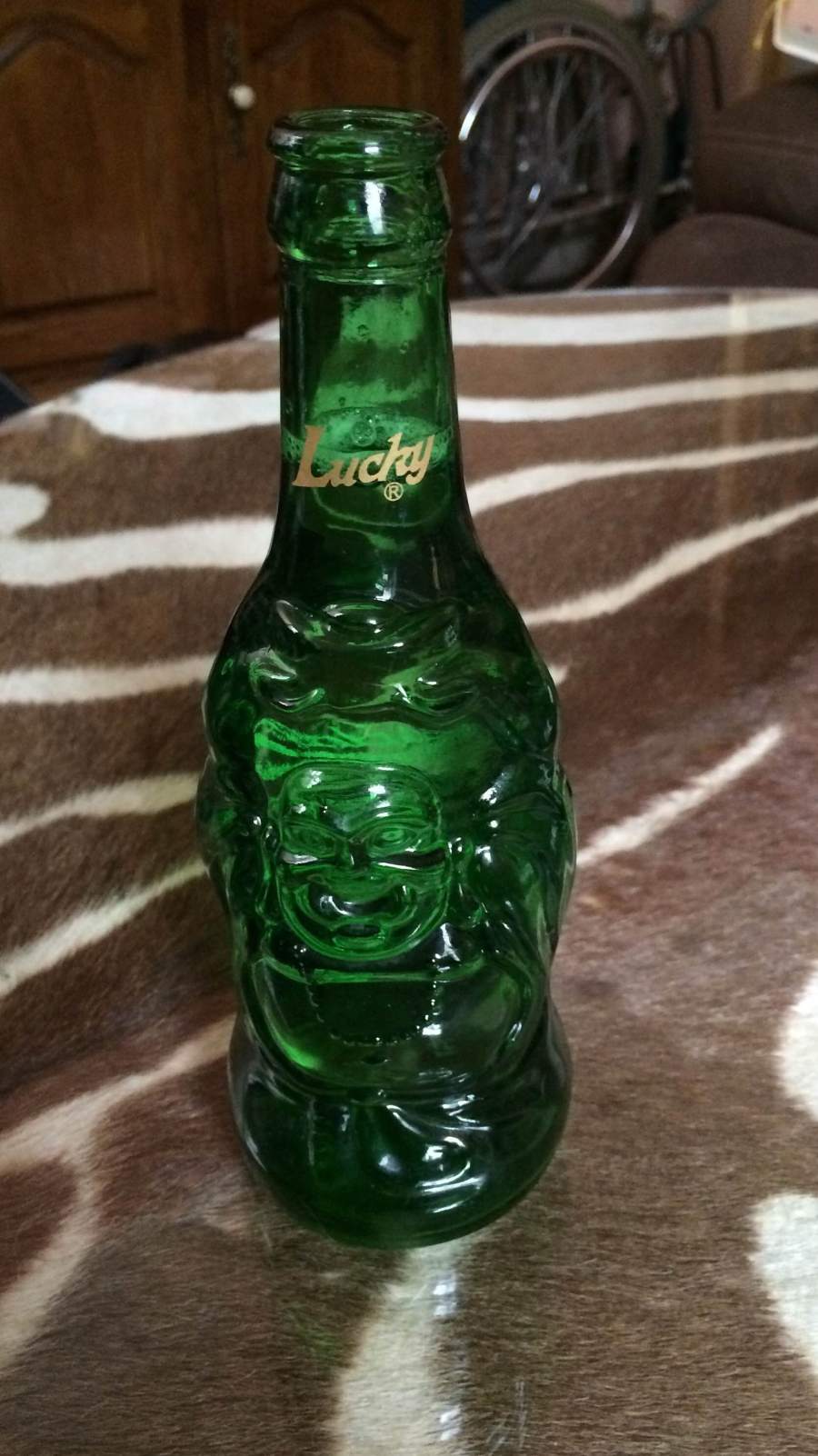 From Fred Brandwood’s We bought a dozen double-yolker eggs as a bit of a novelty treat and have been enjoying them for breakfast and as vegetable frittatas, being extra rich, and a tray of 12 fresh chicken breasts for just £10, which my husband has frozen in pairs so he has them in handy meal-sized portions.

We then went to get a week’s worth of veg and I found myself, as always, tempted to a tray of tomatoes as well. This time I got a box of very ripe, juicy vine tomatoes for a ridiculously cheap £2.50 from Liptrott’s  – just by Ashburner Street entrance to Fruit & Veg Hall. A couple were soft, and beyond saving, but with the rest I made a week’s worth of gazpacho soup, roasted up a large tray with home-grown lemon basil and garlic, for soup and pasta sauce, as well as roasting a load with aubergine, onion, sweet potato and small sweet peppers (from the market, of course), which will make a couple of tasty main meals for me with some baked goat’s cheese or feta.

Unfortunately time was short on our parking ticket by this time, so I didn’t get to go crazy at the cheese counter or take a look at the clothes stalls, but that will be something to look forward to next time. In all we bought the beers, 12 chicken breasts, eggs, broom and a range of vegetables (in pic) for just £40, so really looking forward to returning later this week to spend the rest!

I couldn’t finish off the blog without a recipe, and our favourites this week were made using courgettes, which we are growing in a pot in our garden. We’ve had about half a dozen so far, and are getting new ones every few days. I started with courgette fritters, which couldn’t be simpler, to be honest. Just grate a full courgette (dry off in a tea towel), add a spoonful of flour and a spoonful of cream cheese until the mixture holds together, mould into small cakes and fry gently in vegetable oil. Great instead of potatoes, for a change, or with a little sweet chilli sauce as a snack. 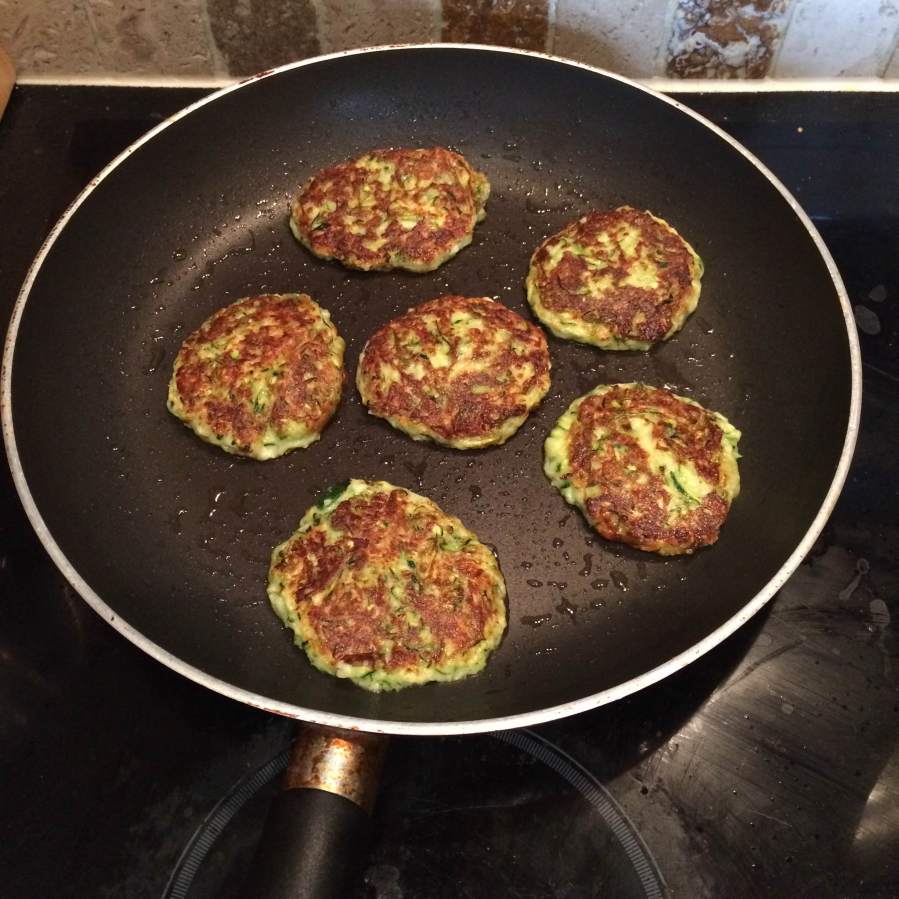 The other was a Rachel Roddy recipe for courgette with breadcrumb, almonds and pasta. Cut the courgette into small chunks and fry in oil with a little chilli powder (I used my homemade, which is lethal!) until soft. In another pan, fry breadcrumbs and some finely chopped, blanched almonds, until crispy. Then you mix the cooked pasta with the courgettes and top it with the crumb. Again it’s fresh, easy and delicious, and it might even make you see the (let’s be honest, slightly bland) courgette in a totally different light. 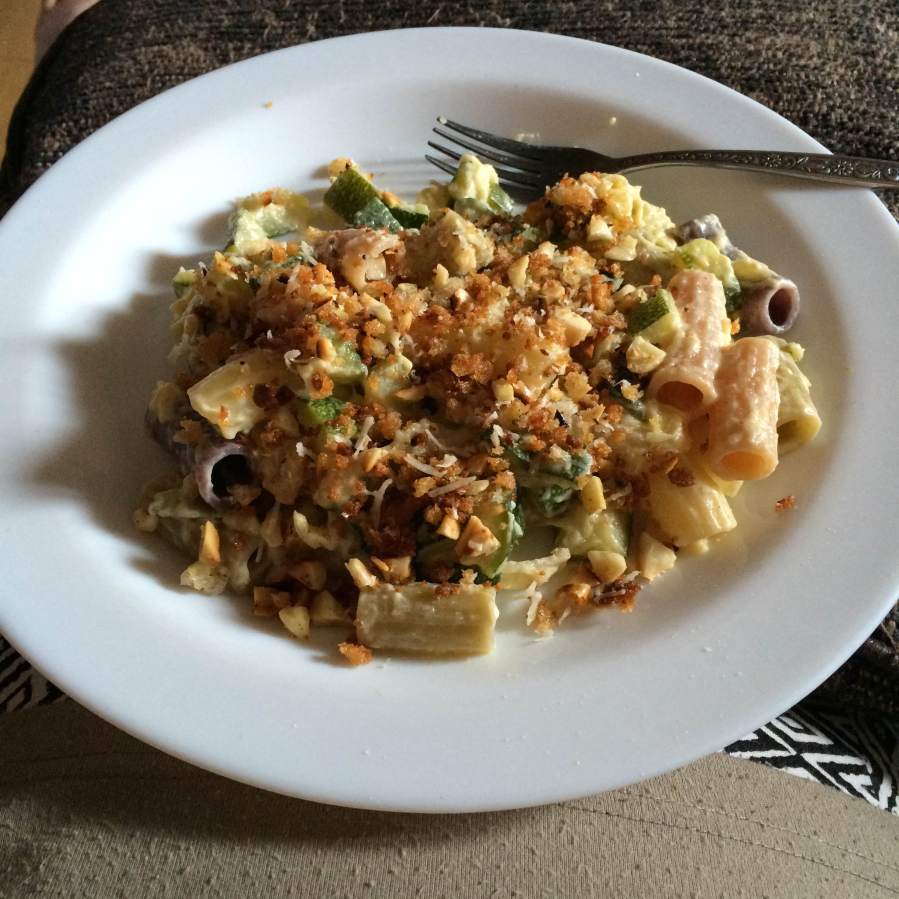