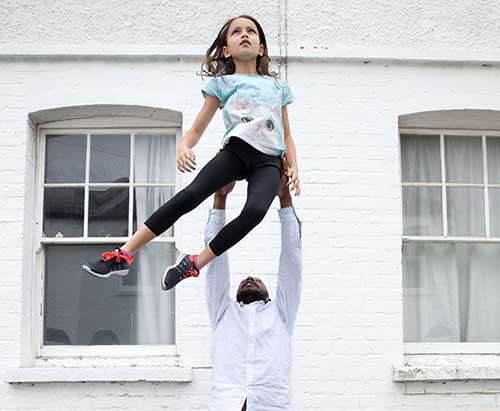 I’m always worried about not understanding something I go and see – especially when I have to form an opinion on it, though with dance usually the safety net of I didn’t understand it but I appreciated how beautiful the movement was will suffice. However with Fevered Sleep’s Men and Girls there is little of either; without any attempt of a deeper meaning and no focus on drawing attention to the beauty of the dancer, instead the creative team opens the space out for the 5 professional male dancers and 9 young girls to simply explore and play.

Honestly, I did find this a little uncomfortable at first, as the cast cover one another in newspapers which scatter the floor,  I initially felt as though perhaps the performance was more geared towards the enjoyment of the young girls on stage rather than our own. However when the cast began really responding to one another I began to really enjoy and (I hope) understand the piece that was being created.
I recently watched a film about an army service dog, and whilst the production was outstanding every time the dog barked or attempted fighting I couldn’t help but be a bit put out, knowing that I was watching an actual dog, and I know it seems irrelevant but I think a similar thing happened here, watching the girls play,move, create, copy and all these other things I couldn’t help but constantly be reminded they are just young girls but I think there is something rather honest and beautiful about that.
And I guess it’s the honesty around the whole piece that for me made it stand out, small details like a triumphant smile after a move had been executed, affectionate eye contact between partners or a little fidget when the girls were made to stand still for long periods of time makes the piece feel much more truthful and with this suspension of any higher meaning it really allows you to enjoy the imagery being created and to explore the evident friendships and comfort shared amongst the dancers.
As the show progressed the movement really began to get exciting, and whilst not straying from the ideas of exploration between body types, as lifts got higher, walks became runs, and little snickers became cackles I really just began to enjoy the performance like I was up there.