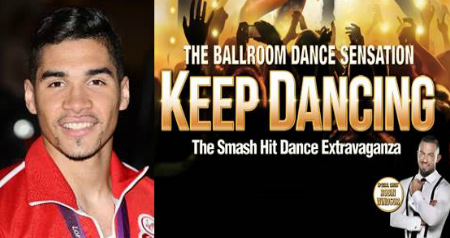 Fresh from winning a Silver Medal at the Rio Olympic Games, gymnast and Strictly Come Dancing champ Louis Smith is to guest star in Keep Dancing at the Palace Theatre, Manchester – a new show celebrating the world of Ballroom and Latin dance.

Louis won the 2012 series of Strictly Come Dancing, and guest stars in Keep Dancing this October following his Silver Medal performance on the pommel horse in this month’s Rio Games.

Strictly favourite Robin Windsor, and other professional dancers from the hit show, will dance alongside world-champion Ballroom and Latin dancers.

Keep Dancing will feature some of the most popular styles of ballroom and Latin dance in this fast paced, high intensity production. With dazzling costumes and breathtaking choreography, Keep Dancing is guaranteed to have the audience dancing in to the night  with champion performers and brilliant dance routines which will deliver a high energy dance production of non-stop entertainment.

Louis Smith was the first British gymnast to win an Olympic medal for over 100 years at the Bejing Olympics in 2008 which he then followed with huge success at the London 2012 Olympics, winning an individual silver medal and leading the men’s team to win bronze. He added to his medal tally at the games winning an individual silver medal in the pommel horse. He was the celebrity winner of the 2012 Strictly Come Dancing.

Robin Windsor was a favourite professional dancer on Strictly and has also starred in the hit show Burn The Floor both in the West End and On Broadway.

Keep Dancing is produced by David King for Spirit Productions, the producers behind the Worldwide dance phenomenon Spirit of the Dance and more recently the 2014 and 2015 hit tours Putting’ on the Ritz and the current tour of That’s Entertainment.