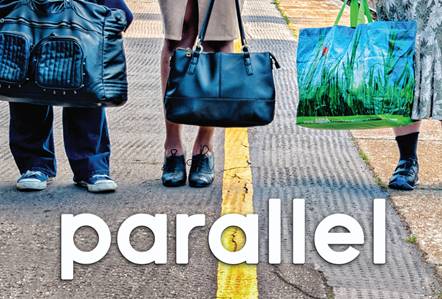 An all-female cast has been announced for a thought-provoking and innovative new play, which tours the North of England this Autumn, co-produced by Black Toffee andHarrogate Theatres.

Parallel is a darkly comic drama, which highlights the personal stories behind homelessness. The play is hugely pertinent, as the national housing crisis worsens and rough-sleeping has doubled since 2010. As well as highlighting this important social issue, Parallel also explores our broader understanding of home, purpose and charity, through the lives of three strangers, who desperately need to connect.

Anna is stranded. Beth came for a think. C just wants some kip. Three women meet by chance late at night. None of them really want to be there, yet none of them leave. It is a rare moment of stillness in a hectic modern world, bringing both solace and discomfort. With only loose change, some booze and a dodgy carrot at their disposal, will any of them find their way home?

The three women will be played by a talented cast who will learn all three parts. A dice roll by an audience member decides which parts the actors will play at every performance. There are in effect, six different versions of the play. Writer, Laura Lindsay, explains her reasoning behind this exciting theatrical device: “The dice roll explores the impact of chance on the outcome of our lives. It illustrates that homelessness can happen to anyone. Ultimately I wanted to emphasise that we’re all very much alike with the same needs and wants, and it is largely fortune and circumstance which determine the quality of our living situation. I also think it is really interesting for the audience to imagine the show in different combinations and reflect on why they think an actor is most suited to a certain part. We’ve had some audience members come to see the show more than once to see another combination.”

The cast are confirmed as Janet Kumah, Arabella Gibbins, and the writer herself, Laura Lindsay.

Janet Kumah trained at the University of North London and The Impulse Company. She has a wealth of experience across stage, TV and film, as well a strong musical background. Theatre credits include the National Theatre of Scotland’s production of Rites, the West End smash-hit, The Bodyguard; and a UK tours of Fame and Snakes and Ladders; while her TV and film credits include Wagstaffe; Alan; 50 Ways To Kill Your Lover; and Containment

Arabella Gibbins graduated from The Oxford School of Drama. Her comedy group, Laughing Stock, recently returned from their second year at the Edinburgh Fringe, where their five-star sell-out show has placed them firmly on the comedy map. Arabella played the lead in the musical Poppiesearlier this year, which premiered at The Space Theatre in London to wide critical acclaim. Other theatre credits include A Streetcar Named Desire; With You Always; The City A Short While Ago; and The Canterbury Tales. Her film credits include Swim to Land.

As well as writing and producing Parallel, Laura Lindsay also takes to the stage as part of the three-strong female cast. A graduate of Manchester’sArden School of Theatre, her acting credits include the national tour of Hidden after a sell-out run at Edinburgh Fringe; Partus; FUSE; You Once Said Yes; and The Rise and Fall of Little Voice; Her screen credits include Emmerdale; Prisoners Wives; Unload; and Fall Out.

The production sees Laura, Black Toffee’s founder, join forces again with Director James Baker. The pair enjoyed recent success and critical acclaim with the musical Parade atHope Mill Theatre in Manchester. Their previous productions together also include The Rise and Fall of Little Voice, which won a Manchester Theatre Award earlier this year.

Designer Victoria Hinton and Lighting Designer Aaron J Dootson were also part of the talented team behind Parade, and they collaborate again on this production of Parallel. They are joined by Sound Designer Owen Rafferty who designed for Laura’s last smash hit show, Hidden.

Parallel is touring five venues throughout November, playing Hope Mill Theatre in Manchester from 1 to 5 November. It will then head to ARC in Stockton (9 November); Derby Theatre (11 November); Lincoln Drill Hall (17-19 November); before concluding at Square Chapel in Halifax (24 November).

The play has been developed with Crisis, the national charity for single homeless people, and Harrogate Homeless Project. It is co-produced by Harrogate Theatre, where the production enjoyed a successful run in March this year. Intense research saw writer and producer Laura Lindsay interview charity staff and service users, as well as attending participation sessions to gain a real insight and hear stories of those affected first-hand by homelessness.

Crisis Arts Coordinator Kellie Gamble praises the results of the process “Laura has authentically and unflinchingly represented the real life experiences of our clients. But despite this brutal truth, she has captured something engaging, funny and warm. The benefits of her research were not just authenticity in the play, being involved in the creative process of the project has helped the members who took part. It has increased their confidence, self-esteem and skills and has enabled them to discover their own latent talents. Working with Laura has been an incredible experience for our members and the organisation alike.”

Black Toffee also made Hidden, which enjoyed a critically acclaimed sell-out run at the Edinburgh Fringe Festival in 2013, followed by a national tour and London run in 2014.