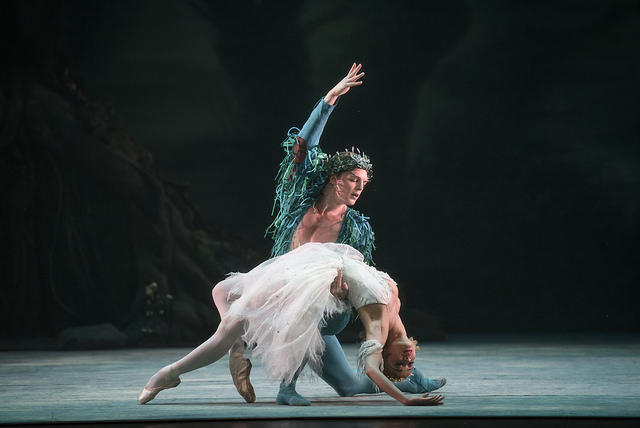 Australian dancer Sir Robert Helpmann once said “Ballet is like football. I don’t understand a footballer’s technique but I can see when he’s playing brilliantly. People don’t like ballet because they think they don’t understand it. Actually they do. It’s the most primitive form of appeal.”

Certainly as I sit waiting for the BRB to begin I feel the fear of not understanding the ballet is very present; I am definitely the youngest sat in the stalls – but while I understand why any ‘royal ballet’ company may seem unappealing to young people, I must agree with Helpmann in that the appeal of the ballet, for me, is extremely important and relevant for our culture. It saddens me that we can sit for hours scrolling through Instagram videos of the seemingly inhuman capability of the ballet dancer but we have no desire to see the athleticism of the dancer when it is being offered live in front of us; and certainly the BRB’s performance was not lacking in unbelievable turns, jumps, lifts and kicks.

The first piece, entitled Wink and choreographed by Jessica Lang, is based on selected Shakespeare Sonnets which accompany the live orchestra.  The aesthetic of the piece is fascinating, the centre of the space is framed by rotating square boards which are black on one side, white on the othe. As these rotate they act as entrances, exits, and seem almost cloud-like as they send light back into the auditorium and dancers fly above and through them – often spinning freely as a mesmerising collective. It is opened by soloist Brandon Lawrence, who is beautifully articulate in his torso and hands, following the text of the sonnet and picking out certain images. As the rest of the dancers gradually feed in and out of the centre, I am drawn to how despite the performers disengaging facially, the very distinct way in which the dancers move between classical line and abstract shape draws attention to the qualities brought out by the movement alone. The penultimate sonnet is the only one which is really accompanied by noticeable music – and is perhaps the most distinctive moment in the piece: two male dancers are left by their female partners and perform a very tender duet which really draws out the sense of yearning expressed in the sonnet, something about the physical strength of the two male bodies in the space performing in a sensitive and vulnerable way is very moving – the sequence finishes with one lowering the other on top of a female dancer lying face down on the floor, the care taken in all these partnerings shows a real maturity in the way the dancers are able to express passion deeper than lust or sexual desire. 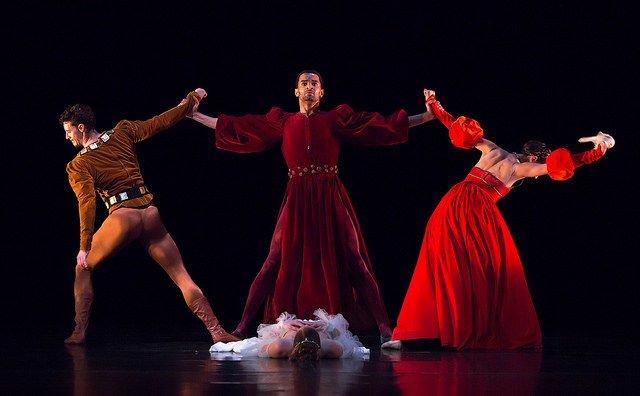 After this, is Josè Limόn’s The Moor’s Pavane (Variations on the theme of Othello), which is a much more traditional quartet danced in Pauline Lawrence’s exquisite renaissance costumes- my favourite of which is The Moor’s heavy Purple Robes which gently follow his movement. The choreography is extremely dynamic, constantly switching between the more classical forms of 17th century court dance and the characterisation drawn from Shakespeare’s Iago, The Moor, Emelia and Desdemona who the dancers each represent, this comes out in moments of violence and passion. It is the rich historical resonance which this piece has despite its simplicity with no set or complex lighting, that is created by the narrative delicately drawn by the dancers and musicians which is so rewarding as the work unfolds – as David Mead notes in the program it very beautifully bridges the modern and classical dance, and BRB have cleverly programmed the work to do just that.

Finally, the bill closes with Frederick Ashton’s The Dream and as the curtain raises for the third time that evening it is a delight to see the stage has been transformed into a Disney-esque magical forest – and it is immediately evident this is to be the most spectacular piece of the evening. The energy which the dancers give to the piece is simply infectious – being very true to the essence of A Midsummers Nights Dream the performances are cheeky, mischievous and unquestionably magical; this is perhaps most noticeable in Mathias Dingman’s Puck who embodies Shakespeare’s troublesome sprite with his evident capability as a male soloist, landing what I think I counted as six pirouettes with a playful shrug out to the audience. Perhaps topping even this is Kit Holder’s Bottom who, kitted up with ass’ head and pointe shoes, bourrées and boogies his way across the stage much to the audience’s enjoyment – and I hear the women behind me whisper to her partner ‘am I really seeing this?’. Ashton’s choreography is of course legendary and will live on for many years to come – most noticeably for me is his clever and comedic confrontations of Lysander, Hermia, Helena and Demetrius, as fists are shook and partners mistook through the detailed and extremely charismatic pas de deux sequences it is impossible not to just sit back and let the somewhat crazy world which has been formed take you in.