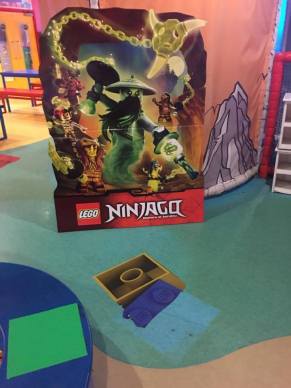 We had the pleasure of visiting Merlin Entertainments’ Legoland® Discovery Centre in Manchester on Saturday, as we had been invited to the new Lego Ninjago exhibition. We were greeted by a friendly member of staff who gave us a bag of goodies. Our tour of the exhibition started when a very bubbly, theatrical member of the team got the children jumping up and down and pushing buttons to get the “machinery” that “created” the lego working.

As we moved further into the exhibition the children had their picture taken with one of the lego ninjago characters. The central area was covered in pits full of lego pieces and test tracks where the children could make and test their own creations. The 4D lego cinema was quite an experience once we had explained to the children that we needed to sit at the front and not the back, they of course got wet! V

“Today was great, I went to legoland. I went to the race car part and built my own car, I also tested it out, it broke a few times on the test track but then I built one that didn’t break, at least until it shot off the end of the ramp.

At the beginning we got free Lego keyrings, a poster and a ninja mask. I saw a big ninja called Kai and took a few photos with him. The ninja playground was the best of all because it had a massive slide. I made my own lego ninja mask and that was really cool. I went on a little police area, people were always crashing but I never did. I felt like I was a real lego person and the gold mine was really fun as well. The shop was great too because I got to make my own lego man.”

We will leave you to discover for yourselves the train ride shooting gallery!