The FTLOSF team have been working around the clock putting together the sci-fi event of the year, with the biggest guests, and jaw dropping props and builds. This event is developing and expanding daily.

Recently they have added several actors to the guest line up including Sylvester McCoy, best known for playing the seventh incarnation of the Doctor in the long-running science fiction television series Doctor Who from 1987 to 1989 – the final Doctor of the original run – and briefly returning in a television film in 1996 and for his role as the wizard Radagast the Brown in Peter Jackson’s film adaptations of The Hobbit.

Coming over from the USA they have Herbert Jefferson Junior who starred alongside Dirk Benedict in Battlestar Galactica, and appeared in Star Trek renegades in 2007. Herbert appeared in many other TV series including Knight Rider, Airwolf, TJ Hooker & more. He also featured in films Apollo 13 & Outbreak.
For comic fans we have John Wagner, who is an American-born British comic writer. Alongside Pat Mills, he helped revitalise British comics in the 1970s, and continues to be active in the British comics industry, occasionally also working in American comics. He is best known as the co-creator, with artist Carlos Ezquerra, of the character Judge Dredd. 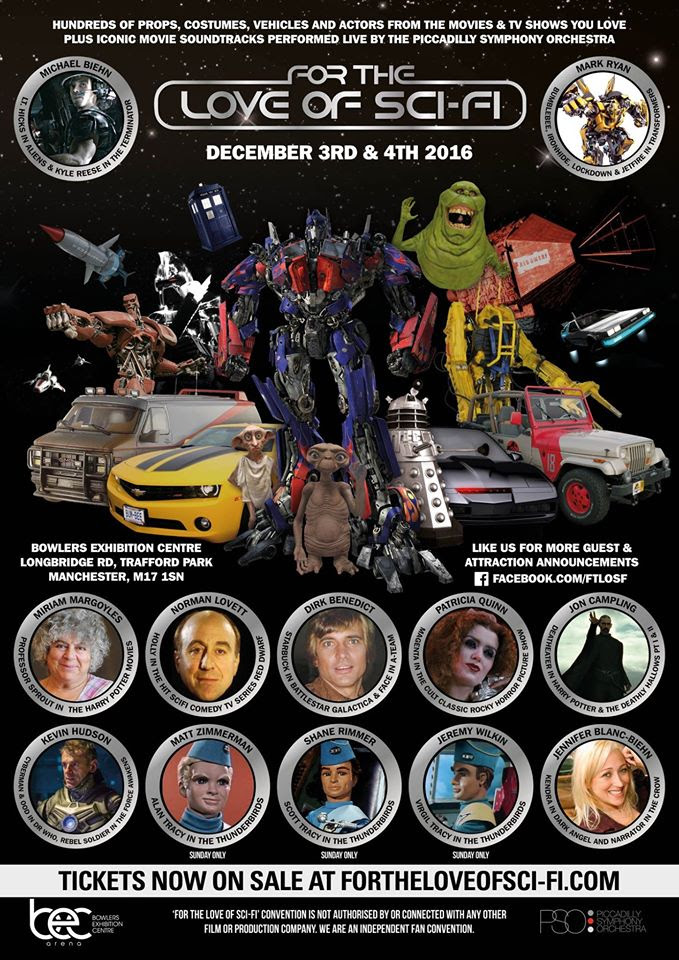 Other guests already confirmed for both days are:

Tickets are now on sale in advance for guest autographs and photographs. You can buy autographs and photos on the day, but some actors may sell out especially photographs so it is advisable to buy in advance. Anyone who has purchased an autograph ticket will get priority queuing over people paying on the day. Each actor will have two sides to their queue, a ticket side and a paying side, tickets will always have priority. We have a specialist team taking guest photos. When your photo is taken, you will receive a ticket which you will take to a designated photo collection point. It will be printed off inside a frame within minutes. You can have as many of your friends and family in the photo as you please.

To buy these tickets visit :- http://fortheloveofsci-fi.com/tickets