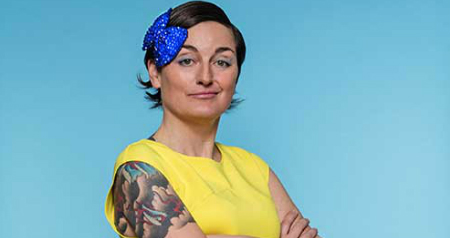 There was something quite sad about the whole evening. The first thing which made me think this way was that The Lowry, Salford`s premier theatre venue had three shows on in all of the three main theatres, and Zoe was found performing in the smallest of the three to an audience of just 60 people, when perhaps she was the most well known artiste in the building. [from her TV appearances on Mock The Week and Survivor, her various radio guest appearances and her award-winning Edinburgh Fringe show].

The second thing which reinforced this thought was that Zoe herself, although she kept on repeating her mantra that at 45 years old, she now was in her “happy place”, having the time of her life because she no longer feels the pressure to conform and belong, there was a definite and palpable sadness to her performance. The lady did protest too much methinks. Even the title of her tour implies that she doesn`t actually believe her own mantra as she calls it “Little Misfit”.

Zoe was born in Wales to an Irish father and English mother and went to a strict Catholic school run by nuns. She realised at the age of 10 that she was gay, and consequently the pressure and stress of this gave her alopecia. Little wonder then, she became a comedienne, she must have had a wealth of material right there from her formative years. She is now 45, married to Cindy, her Dutch wife, with their pet terrier and lives in Brighton; once again affirming that she has reached that point in

her life when she no longer cares about having to fit in and be part of a gang.

Zoe obviously enjoyed her one hour spot with us as she laid her cards on the table right from the start, openly atheist and showing her true political colours within the first two minutes. Not bad, since she hadn’t tested the room to see how those two statements would go down, but no-one heckled. And the third thing which made me believe all was not as gloriously euphoric as she would have us believe was that this hour in her company was much more like a therapy session or heart-on- sleeve chat show that a stand-up gig. She talked candidly about her schooling; her Irish Catholic father; her relationship with her wife, and the first time she met Cindy`s;s parents and more. This should all have been comedy gold, it was however not very funny. We laughed a couple of times, and smiled a few more, but there were no real belly laughs in there, nothing that the audience as a whole could unite in laughter to and leave the theatre with tears in our eyes because of it.

It was perhaps all just a little bit too personal. She firmly believes that the world is becoming more and more tribal and gang-like, especially politically, and maybe she is right; she believes that it is sad that youngsters growing up today will never know of a world without Instant Messenger and fingertip technology; she believes that PC isn`t a bad thing and that it is there to make people be generally nicer to each other, but hasbeen misused and taken too far; etc. I can certainly understand her points of view, but it wasn`t comedy gold. Seriously candid but just not hilarious.

Before Zoe came on, we were treated to a half hour spot from her support comedian, a young man originally from Kettering but now living in Manchester called Will Duggan. He had a very hard job with which he coped adroitly. A group of 60 unsmiling faces greeted him as he stepped out and he needed to warm us all up and get us in the laughing mood. He picked upon two unsuspecting members of the audience and deftly managed to work his routine around what their answers were. He therefore managed quite unbelievably to make comedy about about doctors and nurses.

He also spoke about local pride; how people are fiercely proud of being say, a Yorkshireman, a Liverpudlian etc, and this proved to be a rather interesting foreshadowing of Zoe`s own routine of people belonging to “tribes” However Will was rather upbeat and positive about this, whereas Zoe saw this as a negative.

Both Will and Zoe came across as intelligent and personable people who care about what they do and their easy, relaxed manner was appreciated. [ too many profanities though from Will for my liking ] and it was, despite the lack of laugh-out- loud comedy, a rather pleasant and enjoyable evening in their company.

For more on Zoe`s tour and to book tickets visit http://www.zoelyons.co.uk/