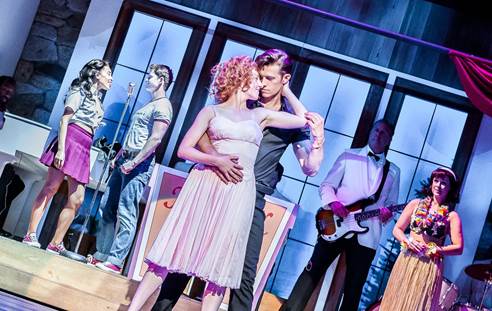 Last night was time to head to Kellermans because Dirty Dancing – The Classic Story Live on Stage mambo`d its way to the Palace Theatre, Manchester

Full of passion and romance, heart-pounding music and sensationally sexy dancing, the record-breaking show has been reconceived in an all new production created by an innovative new creative team; directed by Federico Bellone, choreographed by Gillian Bruce and with design re-imagined by top Italian set designer Roberto Comotti.

The production premiered in Milan in July 2015, subsequently packing out the 15,000 seat Roman Arena in Verona, and has played a season in Rome.

The classic story of Baby and Johnny, featuring the hit songs ‘Hungry Eyes’, ‘Hey! Baby’, ‘Do You Love Me?’ and the showstopping ‘(I’ve Had) The Time Of My Life’,has returned to Manchester`s Palace theatre  following two blockbuster West End runs, two hit UK tours, and various sensational international productions.

The whole cast dance every dance with passion, energy and style. every song greeted by cheers, and every comedy moment met with laughs before they have even happened.

Men want to be johnny(played more than abely by Lewis Griffiths) , women want to be with johnny. His quiff, his muscles, his poise and rugged grace make him both accessible to the audience and a true icon of modern movies.

By far the best facet of the show from my point of view, is the versatility and seamless connectivity of the sets and the actors within them. Each scene is lit perfectly, and log and water scenes are brilliantly tackled in an obviously difficult medium.

A standing ovation tells you all you need to know about this fabulous performance. Go and see it. It’s fresh yet familiar. Take your own water melon! (Pls note..dont we dont want you getting into trouble)

For more information on Dirty Dancing or to book tickets visit: http://www.atgtickets.com/venues/palace-theatre-manchester/