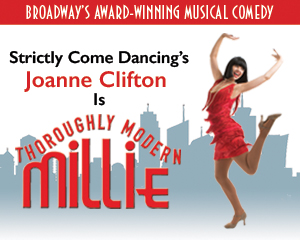 Fresh from dancing off with the 2016 Strictly Come Dancing glitterball trophy, world champion ballroom dancer Joanne Clifton will be starring in a new tour of the classic Broadway musical Thoroughly Modern Millie in 2017.

And now Joanne will star as Millie Dillmount, a Kansas girl determined to make it big in New York City at the Palace Theatre, Manchester in May 2017 as she takes on the lead role in this classic Broadway comedy musical.

Winner of six Tony Awards including Best Musical, Thoroughly Modern Millie is based on the 1967 Academy Award-winning film. Taking audiences back to the height of the Jazz Age in 1920s New York City, when ‘moderns’ including a flapper named Millie Dillmount were bobbing their hair, raising their hemlines, entering the workforce and rewriting the rules of love.

Tickets for Thoroughly Modern Millie are on sale now.