A resident has been handed a £440 fine after she repeatedly ignored warnings to remove around 60 bin bags from her back yard.

Rachel Moden was prosecuted by Bolton Council’s Housing Standards team after they received complaints about the rotting rubbish, which was attracting an infestation of flies and emitting a strong smell.

The 25-year-old ignored repeated requests to get rid of the bin bags in the back garden of her rented property in Moorfield Grove, Tonge.

The council received a complaint in June and asked Moden to remove the rubbish.

Inspectors found the rubbish was still there when they visited later in the month, and that it was attracting a large number of flies and a strong odour. They served official notices requesting that the waste was removed.

A follow-up inspection in August confirmed that the waste had not been taken away and the council was forced to remove it at a cost of £514.22, which will be recovered from Moden.

The 25-year-old failed to attend court and the matter was proved in her absence. She was found guilty of failing to comply with an abatement notice and was fined £440. She must also pay court costs of £266 and a £44 surcharge. 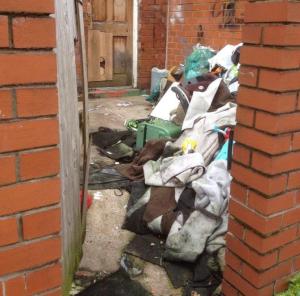 Carmen Baker, aged 45, of Brandwood Street, Rumworth has also been fined. She dumped several bags of rubbish, carpet oddments, furnishings, and a sofa bed in the rear yard of her rented house.

The council received a complaint in June and wrote to Baker asking her to remove the waste. An inspection in June confirmed the rubbish still remained.

She refused to clear it despite warnings and the council had to remove it in August costing £525.22. The clean-up costs will be recovered from Baker.

Both residents were prosecuted as part of Bolton Council’s ongoing crackdown on rubbish and fly-tipping.

Bolton Council’s Cabinet Member for Housing, Cllr Elaine Sherrington, said: “There is simply no excuse for dumping rubbish in this way and these cases show how the actions of one or two residents can affect an entire community.

“We gave both occupiers numerous chances to sort this out and co-operate with us but they took no action. We have also contacted the landlords of these properties to make them aware of the issues.

“We are grateful to the public for being vigilant and reporting these cases to us. We will prosecute when requests and warnings are ignored.”

Complaints about waste on private land, including properties, should be referred to the council’s Housing Standards team on 01204 336500.