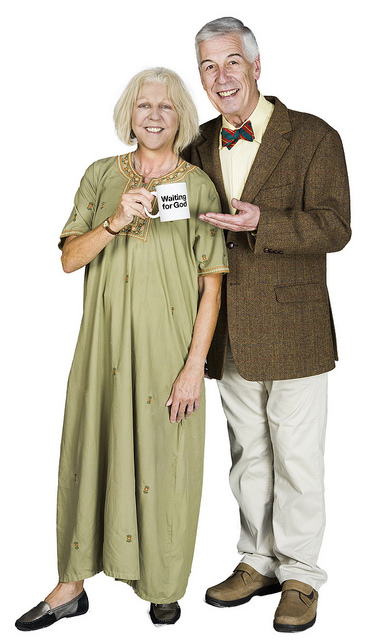 Jeffrey Holland will star as Tom Ballard in the premiere stage production of the BAFTA-nominated Waiting for God which is directed by David Grindley.

Holland and his co-star Olivier-Award winner Nichola McAuliffe will head a cast of nine directed by Tony Award winner David Grindley.  Waiting for Goddelighted TV audiences across five primetime BBC series in the 1990s and this all-new script is penned by the sitcom’s creator Michael Aitkens.

All the favourite characters from the original series are reimagined for 2017, facing the challenges that come with growing old disgracefully in the era of the silver surfer. At Bayview Retirement Home, battle-axe extraordinaire Diana Trent conspires with new resident Tom Ballard to give the conniving manager his comeuppance with unexpectedly heart-warming results.

Jeffrey Holland is still best known for his breakthrough role as Spike in ‘Hi-de-Hi!’ He went on to create the stuffy footman James Twelvetrees in the popular Croft and Perry sitcom You Rang, ‘M’Lord?’ and the starchy station master Cecil Parkin in ‘Oh, Dr Beeching!’ His latest TV role is as tax inspector Clive Drinkwater in Coronation Street. On stage, he has toured in a variety of productions including several Ray Cooney farces, Ayckbourn’s ‘Relatively Speaking’ and ‘Confusions,’ Arnold Ridley’s The ‘Ghost Train’ and Andrew Lloyd Webber’s musical comedy, ‘By Jeeves.’ More recently, Jeffrey starred as George Findley in Victoria Wood’s play ‘Talent,’ directed by the playwright, and with Ray Cooney and an all-star cast in ‘Two Into One,’ both at the Menier Chocolate Factory. He has also completed to two successful runs at the Edinburgh Fringe and numerous performances around the country in his one-man show …and ‘this is my friend Mr Laurel,’ written with Gail Louw.

Actor, writer and novelist Nichola McAuliffe is well known for her role as Sheila Sabatini in the ITV sitcom Surgical Spirit, which ran for six years.  She is also the star of numerous stage shows and won the 1988 Olivier Award for Best Actress in a Musical for her role in Kiss Me, Kate.  Most recently she starred in ITV’s Victoria and BBC’s Doctors.  She was also the voice of James Bond’s BMW in Tomorrow Never Dies. As well as writing several plays, McAuliffe has published two novels, ‘The Crime Tsar,’ based loosely on ‘Macbeth;’ and ‘A Fanny Full of Soap,’ a comic novel about the pre-West End run of a stage musical, plus a children’s story, ‘Attila,’ ‘Loolagax.’

Michael Aitkens is a writer for the screen and stage who was Bafta-nominated for Waiting for God.  He h as worked all over the world and had over 200 scripts produced for film and television. He is a core writer for Midsummer Murders and also wrote Class Act for Joanna Lumley.

David Grindley’s production of ‘Journey’s End’ won the 2007 Tony Award for Best Revival.  Most recently he directed ‘The Heiress’ at The Gate Theatre Dublin and ‘Sideways’ at the St James Theatre and other credits include the world premiere of ‘Daytona’ at Theatre Royal Haymarket, ‘Our Boys’ at the Duchess Theatre and the UK tour of ‘Jeffrey Bernard is Unwell’ with Robert Powell.