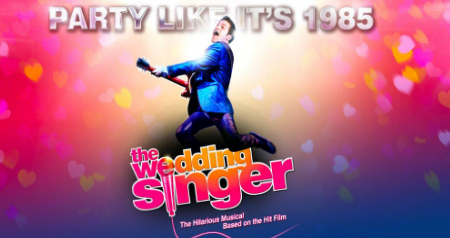 The Wedding Singer, based on the hit film starring Adam Sandler. What a great, fun night out.

The stage is set with an “all American” billboard, playing  the trailers of all you favourite 80s movies. The 80s theme, like the movie, snakes it way through the whole Production. From costumes and props to dance routines and music style – it’s a definite 80s indulgence.

The story itself is pretty close to the film, with the songs you remember and lots or originals. Some parts have been changed, I would guess due to logistics and stage management, but there are some absolute gems added to the show.

My particularly favourite scene involves Ruth “hi-de-hi” Madoc as you have NEVER seen her before. I won’t spoil it, but wow! There were tight dance routines, fantastic vocals and a great supporting cast, but Ruth most definitely steals the show.

Ray Quinn was a great selection for the arrogant business tycoon, Glenn Gulia, with the attitude, vocals and physical presence to pull it off. Another strong performance was found in the stunning Tara Verloop, playing Holly, who has fantastic vocals, and really encapsulates the 80s atmosphere. Cassie Crompton, as Julia Sullivan, was lovable, believable and really sold the naivety of the character with some beautiful harmonies and vocals.

The protagonist of our story, Robbie “The Wedding Singer” Hart, is portrayed brilliantly by Jon Robyns. His vocals are great, but his energy in the role totally fits with the neon lights of the 80s. His hilarious interactions with the supporting cast are reminiscent of Sandler, and the absolute tongue in cheek acknowledgement that the stage show can’t replicate some parts of the film was lead beautifully by Robyns. Again, no spoilers, but you won’t be disappointed.

In summary then, a close adaption of the film, with some great numbers, and a feel good factor that left you in a good mood and ready to don the leg warmers. Seriously though, check it out, if only for Ruth Madoc…