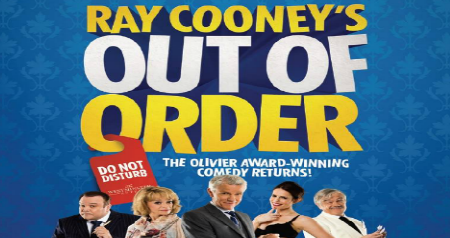 On first reading ‘Out of Order’ didn’t fill me with much confidence that it would be able to deliver uniquely defined comedy with a plot that seemed fairly simple, and perhaps a little clichéd. A cheating husband, found with a secretary in hotel room when disaster strikes, this unfortunately not an all too uncommon situation in this day and age. However Ray Cooneys’ play completely changed my initial opinion. It was a cleverly written, well timed and extremely funny play, filled with sexual innuendo and topical political humour. With a slow start, and slightly over dramatic initial opening scene, it soon became a suspense filled and unpredictable sequence of events. It allowed the audience to laugh along without judgement in a way in which only the genre of farce can. Farce allows us to watch the sort of bad behaviour we could never publicly endorse but which we secretly know we might be capable of.

Richard Willey, a Conservative Government Junior Minister orchestrates an evening with Jane Worthington, one of the Opposition’s typist, but things spiral out of control, snowballing into a chaotic conundrum, centering around a web of lies. It begins with the discovery of a ‘body’ trapped in the hotel’s only unreliable sash window.

Richard calls for his Principal Private Secretary, George Pigden who, through Richard’s lies, plummets unwittingly into an identity crisis. Things go from bad to worse with the arrival of Ronnie, Jane’s distraught young husband: with the addition of an unscrupulous waiter, Mrs Willey and Nurse Foster, things really come to a head.

The first half of the play centered around Richard and George concocting a cleverly delivered, highly farcical and undeniably humorous web of deception. This Web became funnier and funnier as the audience started to resonate with the two characters misfortune and inability to escape their ever growing dilemma. Perhaps the highlight of the entire performance was Shaun Williamson’s brilliant portrayal of George’s pitiful attempts to stop disasters from developing. His comedic timing and facial expression were truly believable and it made the play feel believable, as if this situation could be happening to any one of the audience.

Without revealing too much of the plot, and spoiling some of the very well thought through and expertly performed comedic mishaps, I would definitely recommend a visit to Manchester Opera House to watch this classic farcical comedy.

Out of order is showing at The Opera House in Mnchester until the 3rd of June. For more information and to book tickets click HERE