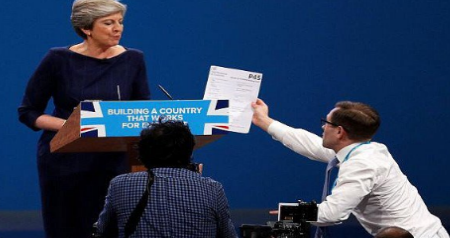 Cllr Bob Allen , The representative for Heaton and lostock tweeted the remark yesterday, apparently Referencing the banner that was tied to a bridge in Salford that said ‘hang the Tories’, straight after Prankster Simon Brodkin AKA Lee Nelson interrupted Prime Minister Theresa Mays Conference speech by handing her a P45- the document you’re given when you leave a job saying “Boris Johnson asked me to give this to you”

Cllr Allen Tweeted “Like most people I have never heard of Simon Brodkin. The little weed of a man should be hung from the bridge so liked by Labour.”

You can't criticise the bridge stunt while also making statements like this. Incitement to violence is never OK.

Are you advocating people should be killed for staging a non violent protest? Wasn't aware the UK had become a totalitarian state. Yet.

A completely inappropriate tweet, especially from a borough Cllr.

“I am 100% against capital punishment because the justice system makes mistakes. In the past we could have hung innocent people, an irreversible step.

I had no intention to offend with my tweets about the rather rude interruption to the prime minister’s speech today but I cannot believe anyone would seriously believe I could advocate hanging for a protest stunt.

I will not be bullied by the faux outrage of people who hold the same political beliefs as the Labour activists who hung the banner on the bridge suggesting that Tories should be hung.”