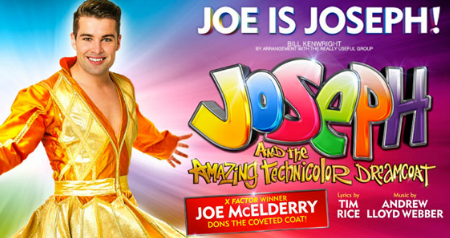 Having enjoyed sensational reviews, Bill Kenwright’s “Amazing”, “Superb”, “Wonderful” and “Brilliant” production of Tim Rice and Andrew Lloyd Webber’s sparkling family musical continues to enjoy huge success across the country with standing ovations at every performance and last night was no exception

Retelling the Biblical story of Joseph, his eleven brothers and the coat of many colours, this magical musical is full of unforgettable songs including Those Canaan Days, Any Dream Will Do and Close Every Door To Me.

Joe McElderry did a fantastic job last night and i can see why the tour is getting rave reviews. His singing was en point as was his physical acting and movement skills. Joe has come a long way the last few years and that shines through during his performance and his mastery of the stage.(Joe was just 18 when he won the sixth series of The X Factor in 2009 and immediately went straight to number one on the UK Singles Charts with his debut single The Climb. He has since gone on to have three top ten albums, as well as notching up two more reality TV show victories, winning ITV’s Pop Star to Opera Star and Channel 4’s The Jump)

Trina Hill`s Narrator was absolutely amazing with vocals that put any previous narrator to shame… not only was she stunningly beautiful her voice was to die for and she tied the production very neatly together with the right pace and balance. The old adage “a good narrator can make or break a show”  applies here as she was just brilliant and elevated the show in my opinion.

Henry Metcalf’s Jacob / Potiphar was very nicely done and his movement and acting skills are second to non. His stage presence is something to behold as he works it like the true professional that he is. His singing was en point and masterful as always

Ben James- Eliis as the Pharoah / Issacher was a delight to watch as usual bringing to life both characters with his trademarked great acting and movement skills.

A special mention needs to go to The Handmaidens , Anna Campkin, Sallie- Beth Lawless and Gemma Pipe who were constantly great throughout and also a special mention For Kevin Grogan`s “Swing” who`s rendition of song of the king gave me goosebumps.

Very tongue in cheek but great entertainment and fun. This show is one not to be missed. With Brilliant staging and sets plus also some stellar performances you can not afford to miss it during it`s Manchester run or any other stop on the tour. I would heartily recommend this show to people of all ages as it will appeal to all of them.

Review by Wendy Ann for #BoltonLive

Joseph is playing at The Palace Theatre Manchester until Saturday 21st October 2017 and then at venues across the country.