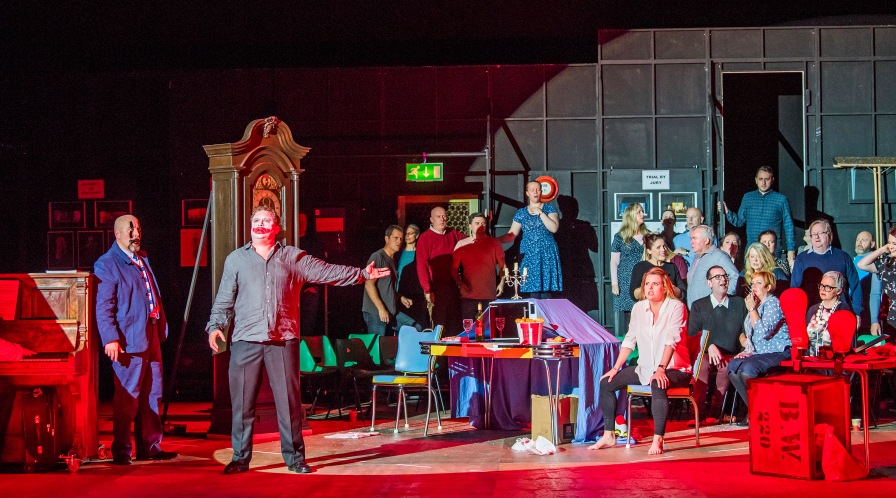 I came to these two productions by Opera North as parts of their ‘Little Greats’ season as a complete newbie.  I had obviously heard the most famous pieces of music from them over the years, but had never witnessed them in their original versions,  I thus have nothing to compare them with, just my own initial impressions and no preconceptions as to how they should be staged.

This is the tale of a touring theatre troupe preparing for a show which tells the comic tale of a clown  Pagliacci who is cuckolded by his wife Columbina with her lover Arlecchino.  Their servant Tadeo is also in love with his wife.

The leading man Canio/Pagliaccio (Peter Auty) is eaten up with jealous suspicion of his wife Nedda/Columbina (Elin Pritchard), the leading lady.

The tour’s designer who also plays Columbina’s servant in the ‘play’ Tonio/Taddeo (Richard Burkhard) is in love with Nedda but she is having an affair with the play’s conductor Silvio (Philip Rhodes).

The action takes place over the space of one day and ends in tragedy when a spurned Tonio betrays the real life lovers to Canio who then murders them in a shocking on-stage finale watched by the play’s horrified audience (the opera chorus who also double as the play’s ensemble).

The use of the stage (set as a contemporary rehearsal room before a performance) whilst the audience entered and the orchestra tuned up worked well – providing interest and it set the scene, with cast members preparing lines and costumes etc.

The prologue, in English, performed by Tonio/Taddeo (Richard Burkhard) was compelling;his direct addressing of the audience engaged us and prepared us for the main action, reminding us they were real people and not just players.  His duet with Nedda So ben che difforme was also very moving.

Auty was steely in his desperate anguished revenge and despair (Vesti la Giubbia) and Burkhard was very powerful and creepily menacing when he appeared as a clown – theatrical clown make-uo was used to great effect on both Canio and Tonio.

The chorus and orchestra were a hugely integral part of this production’s success and, having – at first – been very unsure of what the production was trying to achieve, I would very much like to go and watch Charles Edward’s envisioning again.

The production’s setting has been moved from its original Sicily to late 70’s Poland by its director Karolina Sofulak.   Both cultures are matriarchal and very intense in their rigid codes of Catholic mores.

The set well reflects the impoverished lives of the protagonists where life is endured and any chance for happiness grasped at.

The story is that of a young man Turiddù (Jonathan Stoughton), spoilt by his mother the shopkeeper Lucia (Rosalind Plowright).  He has a 1st love Lola (Katie Bray), however she marries another man Alfio (Philip Rhodes).  Turiddù , with his pride hurt, turns to and seduces Santuzza (Giselle Allen) a very religious girl. This affects her both mentally and emotionally as she then feels cut off from her church which is at the heart of the community’s social and moral life.

Lola observes this, and jealous and, already bored with her new husband Alfio, embarks on an affair with Turriddù who then deserts Santuzza.

Driven mad by grief and rage, Santuzza reveals the affair both to Lucia who is heartbroken and shocked that her son could offend against the religious and social codes and to Alfio who determines to avenge the betrayal and affront to his honour.

Contrasting with the peace and beauty of the Catholic rite of Easter and the religious allegory of the Son rising again, bringing hope and forgiveness, the human reality of the revenge murder plays out with Alfio shooting Turiddù dead whilst the three women in his life look on in despair and numbed acceptance of his fate, which he anticipates and colludes in without resistance.

The set, special effects and props used in this production were excellent – including the use of a trabant car!

All three main female characters in this version were excellent, both in their vocal and dramatic performances and were a joy to watch, the most powerful I have seen this year.  I especially enjoyed Lola’s Fior di giaggiolo.  The two main male leads were also terrific and completely believable, portraying their characters with immense skill.

The chorus is Opera North’s wonderful main strength and should be congratulated.  The orchestra under the inspired direction of Tobias Ringborg relayed the lyricism of Cavallo’s music beautifully.

I would love to revisit this production too as there is far more to be gleaned from it that can be garnered in just one performance.

The sets, lighting and costumes all contributed greatly to these productions.

Opera North is to be applauded for the brave and inspired approach to these two productions which are indeed ‘Little Greats’ and will, I am sure, act as launch pads for the burgeoning careers of some of their multi talented performers.   I cannot wait for the next in the series.