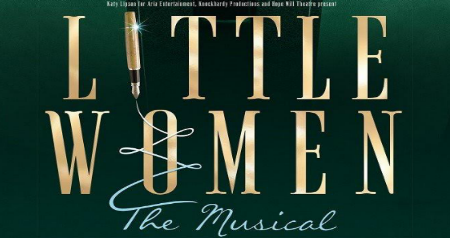 Hope Mill Theatre never ceases to astound and amaze; and in this case it plays host to
yet another first, the European Premiere of the Musical, Little Women. With music by Jason Howland, lyrics by Mindi Dickstein, and a book by Allan Knee, this Musical
sticks very closely to the original novel of the same name, which is itself a semi-
autobiographical account of her life in 19th Century small-town Massachusetts, by
America`s answer to Jane Austen, Louisa M. Alcott.
An impressive, well-designed set, and almost perfect lighting plot, made this Musical
visually exciting. Costumes were excellent and period, and an image that will stay in
my mind for a long while – a beautiful “flying a kite at Cape Cod”tableau. [Nik
Corrall and Ben M Rogers].
Musically superb, using only a string quartet and piano, the fullness of orchestral
harmony somehow wasn`t lost and it gave the whole a more “authentic” feel rather than
trying to electronically recreate full orchestral sounds. A genuinely ingenious touch,
thanks to Musical Director Rickey Long.
If you don`t know the story of the classic novel, then in a nutshell, it concerns a poor
family in up-state Massachusetts during the Civil War. The unseen father is a Union
army chaplain, absent from his familial duties, leaving back home his wife Marmee
and his four daughters. One of them, Josephine (Jo) is our protagonist and the driving
force of the show.
Jo doesn`t fit the mould, a rebel and outcast to society at that time, she refuses to be a
model 'girl' and kowtow to a society into which she simply cannot fit. She is a
dreamer who needs adventures, and so she pours her creative energies into writing. {
yes, Jo is Alcott }. The Musical takes us seamlessly through her life from her
beginnings trying out her short stories with her sisters acting them out for Christmas
entertainment to her eventually writing the novel which will make her famous, Little
Women and accepting a marriage proposal from her German tutor, Fritz Bhaer,
several years older than herself.
As stories go, it is romantic, very twee and too predictable – but I doubt very much
that one could find a better cast in order to bring it to life as brilliantly as these did.
Amie Giselle-Ward played the brassy unconventional upstart Jo with vim and vigour
from start to finish, and her performance was spellbinding. No less credit should be
given to her three sisters; the oldest and most “sensible” of them being Meg played by
Jemima Watling; the youngest sister, desperate for attention and dying to find her way
within society was Amy, played by Katie Marie-Carter; and Beth, the peace-keeper
and quietly passionate sister, played by Cathy Head. Along with their mother,
Marmee, played with earnest realism by Anna Stolli, this was a veritable and
formidable female quintet of talent.
And just in case you are thinking that this is an all-female Musical, it wasn`t – but it`s
most certainly a Musical by women, about women, and one which I feel that probably
in general women will be able to relate to and emote with more than I did. Jo will
undoubtedly be hailed as a heroine and a “woman before her time” and this will certainly appeal. But in order to balance the scales somewhat then mention should be made of male neighbours the Laurences. Tony Stansfield was the stern, wealthy
society gent held very much at arm`s length by the Marches, but through music he
shows his softer side, and Stansfield gave a lovely well-measured performance here.
His grandson, Laurie, an excitable and somewhat naive boy about the same age as Jo
was Connor Hughes; and Laurie's tutor Brooke, a very believable interpretation by
Joel Harper-Jackson.
Branagh Lagan has directed this Musical with confidence and style, giving gravitas to
a rather soppy and sentimental story, and by bringing the characters to vivid life, it
was very watchable and engaging.