Based on the beloved 2003 New Line Cinema hit starring Will Ferrell, ELF is the hilarious tale of Buddy, a young orphan child who mistakenly crawls into Santa’s bag of gifts and is transported back to the North Pole. Unaware that he is actually human, Buddy’s enormous size and poor toy-making abilities cause him to face the truth. With Santa’s permission, Buddy embarks on a journey to New York City to find his birth father, discover his true identity, and help New York remember the true meaning of Christmas. 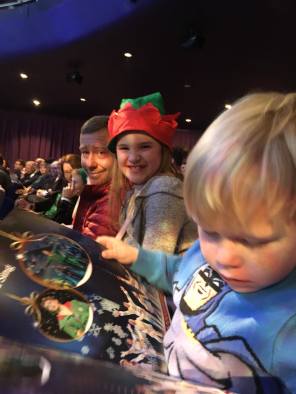 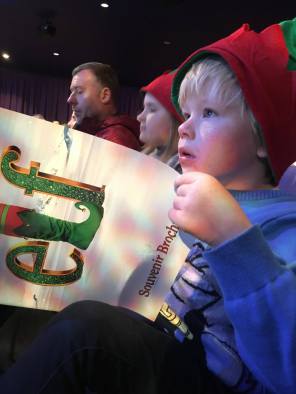 Mia (8) & Harry’s (4ish) Review: Elf at the Lowry
“We had an amazing night for my brothers 4th Birthday. The Lowry looked very Christmassy and we were welcomed in by a lovely choir singing Christmas carols.

At the start of Elf, Santa came on and told us to ask the person next to them if they needed a hug! Which was funny…we laughed a lot all the way through. Harry’s favourite character was ‘Buddy the Elf’ (Ben Forrester) who was really bubbly and just like the actor in the film! Harry found it really funny when Buddy got stuck in the revolving doors.

The changing scenery was brilliant – 17 scenes in all and Harry often shouted which part was from the film!
My favourite bit was when Buddy helped his dad get a book deal with his own story.

I loved all the costumes, songs and dancing, we laughed a lot and left feeling very happy!

At the very end, Buddy came on stage with the cast and told us that all the box office money from tonight was to be donated to the Care after Combat Charity to help people who have been to war. I thought this was very kind and donated all my pennies in the collection bucket. Overall we had a great family night out for my brothers 4th birthday and i think everyone should watch this show if they get a chance.

Thanks Boltonlive, The lowry and the Show for giving us this opportunity.”

From a parents perspective – it was a fantastic performance from all the cast. Lovely to see the children enjoy such a well put together and thought out stage production!

The sets were ace as were the special effects and it also had a lot of adult humour which made it even more enjoyable for us adults! As a parent i would heartily recommend this show as part of your Christmas during it`s  run at The Lowry.

Final Score: 🌟🌟🌟🌟🌟 A perfect Christmas Treat for all the family

Elf runs at The Lowry until 14th January 2018 , To book tickets and for more information click HERE

Review by Harry , Mia and Paula Rowson for #Boltonlive