On Sunday myself and my family were invited to test out The last Drop`s new Panto lunch and my we were not disappointed. 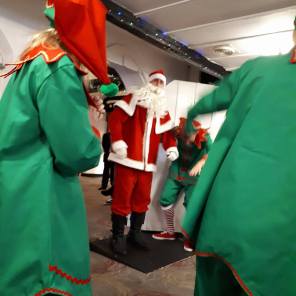 As soon as the elves appeared and escorted the children into the elves workshop they had them entertained, with bubbly personalities and silliness the children enjoyed writing and drawing letters to Santa and playing games. the elves spent time talking to every child making them all feel very comfortable and keeping them engrossed in the activities until Father Christmas made his visit where he to spoke with every child and had a picture taken with them.

We were all then taken through to the dining hall which was beautifully set out. the starters were efficiently served by the waiters and what a start they were, the soup was lovely and the pate was a treat for the eyes as well as the tongue. A child friendly menu to satisfy even the fussiest of eaters of which we had two, they adored the pizza and chicken nuggets and they loved that they could return for more if they wished. 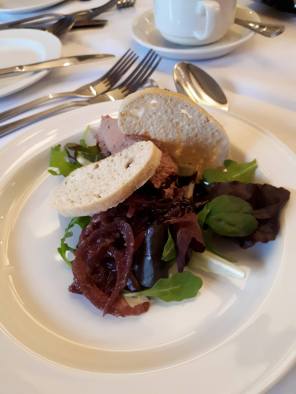 The Adults meals were more a traditional roast, again served with expert precsion, the turkey and beef were lovely and tender, enjoyed by all.

The panto started as everyone was finishing their meals, the children like little meerkats had their attention directed at the pirates straight away, with a twist on well know songs, impersonations and classic slapstick the children lit up and with the inclusion of a few adult jokes kept everyone entertained throughout.

During the interval desserts and hot beverages were served, the chocolate cake and ice cream were wolfed down by the children much to the parents disappointment, but they soon recovered once the medley of mini deserts arrived, they were delicious.

Part two of the panto concluded the show with a few twists and a wedding, but the singing voices of the cast made them a pleasure to watch and listen to.

The last drop have simply surpassed themselves with this bold new take on a panto trip. The venue is stunning and the performance was top notch by the cast all the way from beginning to end

The children with me had a blast and have been talking of nothing else since!

The whole family were treated really well by the staff , Who need a special mention for the precision and speed the food was served and their professionalism throughout and i heartily recommend that if you have space in your Christmas Calender to book your places asap and not to miss this!

Review by Cassie Rushton for #BoltonLive