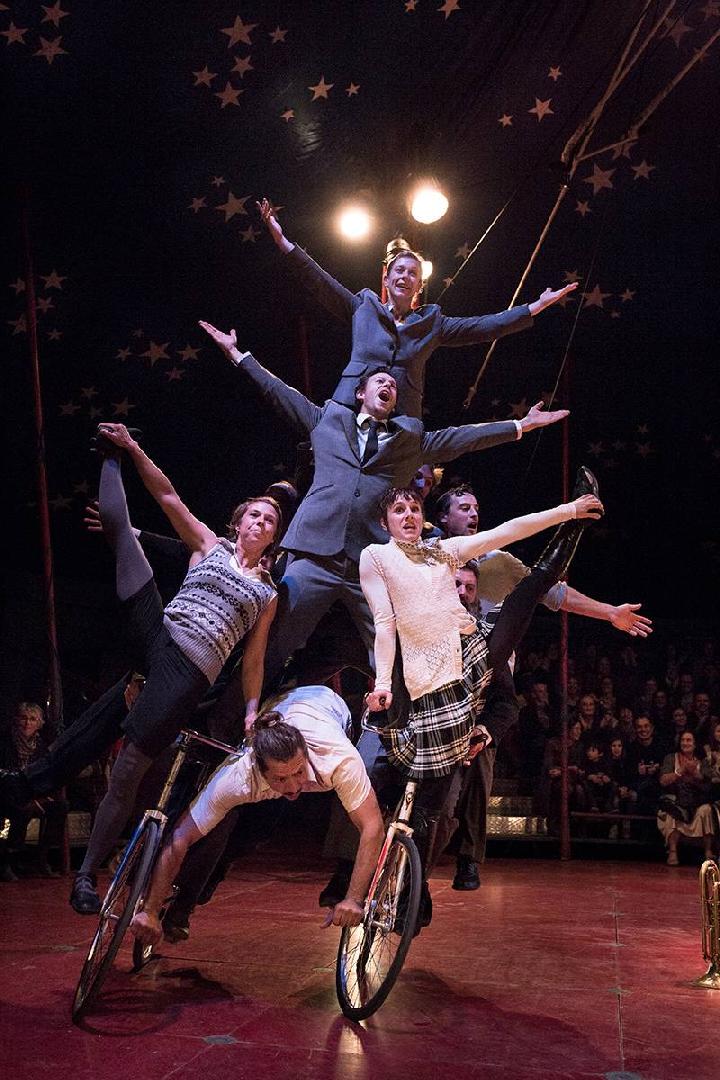 On Mon 27 August, eleven acrobat-musicians from the celebrated French contemporary circus company Circa Tsuica will arrive on The Lowry Plaza to set up for their latest show Now or Never– a collaboration with 20 young musicians from the MAPAS Jazz Band, Salford.
Passers-by can watch as Circa Tsuica erect their red and white Big Top on the Plaza then set up their circus village around it – reinventing circus traditions for the 21st century as they start getting ready for the show.
When the tent opens on Thu 30 August, the audience is invited in for Now or Never, an exhilarating fusion of stunning acrobatics and funky brass rhythms, where acrobats, musicians and audiences all play their part. As the party begins, the performers mingle with the crowd, making and sharing Breton crêpes, before they launch into a feast of music and circus.
The acrobat-musicians fly, fling and swing across the tent on trapezes, tightropes, Cyr wheels, trick bicycles, trampolines and seesaws. All the while, they play their thundering brass rhythms accompanied by seven young musicians from MAPAS Jazz Band.
Baptiste Bouquin from Circa Tsuica will be coming to the UK to teach the 20 young musicians their role in the show, with the first workshop is taking place on Sat 7 July.
Richard Milton, leader of the MAPAS Jazz Band, said: “We are delighted to be asked to once again perform alongside the fantastic musicians of Circa Tsuica in their show Now or Never. We at MAPAS (Salford’s music and performing arts service) are always looking for different ways to stretch our pupils musically and working with Circa Tsuica on Opus 7 two years ago certainly did this. The young people in the band learned so much from the experience and all wanted to sign up again as soon as we were approached for this year’s project.”
Rachel Clare, artistic director of producers Crying Out Loud, said: “We are excited to bring you a new circus experience to celebrate Circus250, a special circus anniversary. Combining the joy of French musical-circus with English Brass bands, Now or Never is going to be a memorable event, a chance to experience the best taste of culture from both sides of the channel.”
Now or Never is presented by Crying Out Loud as part of Circus250, the nationwide celebration of the 250th anniversary of modern circus.
The tour of Now or Never is supported by Ambition for Excellence using public funding by the National Lottery through Arts Council England.
Listings Information
Circa Tsuica – Now or Never
The Lowry Plaza
Dates: Thu 30 Aug – Sat 1 Sept
Times: 7pm
Tickets: £16, concessions £13, Family ticket £50