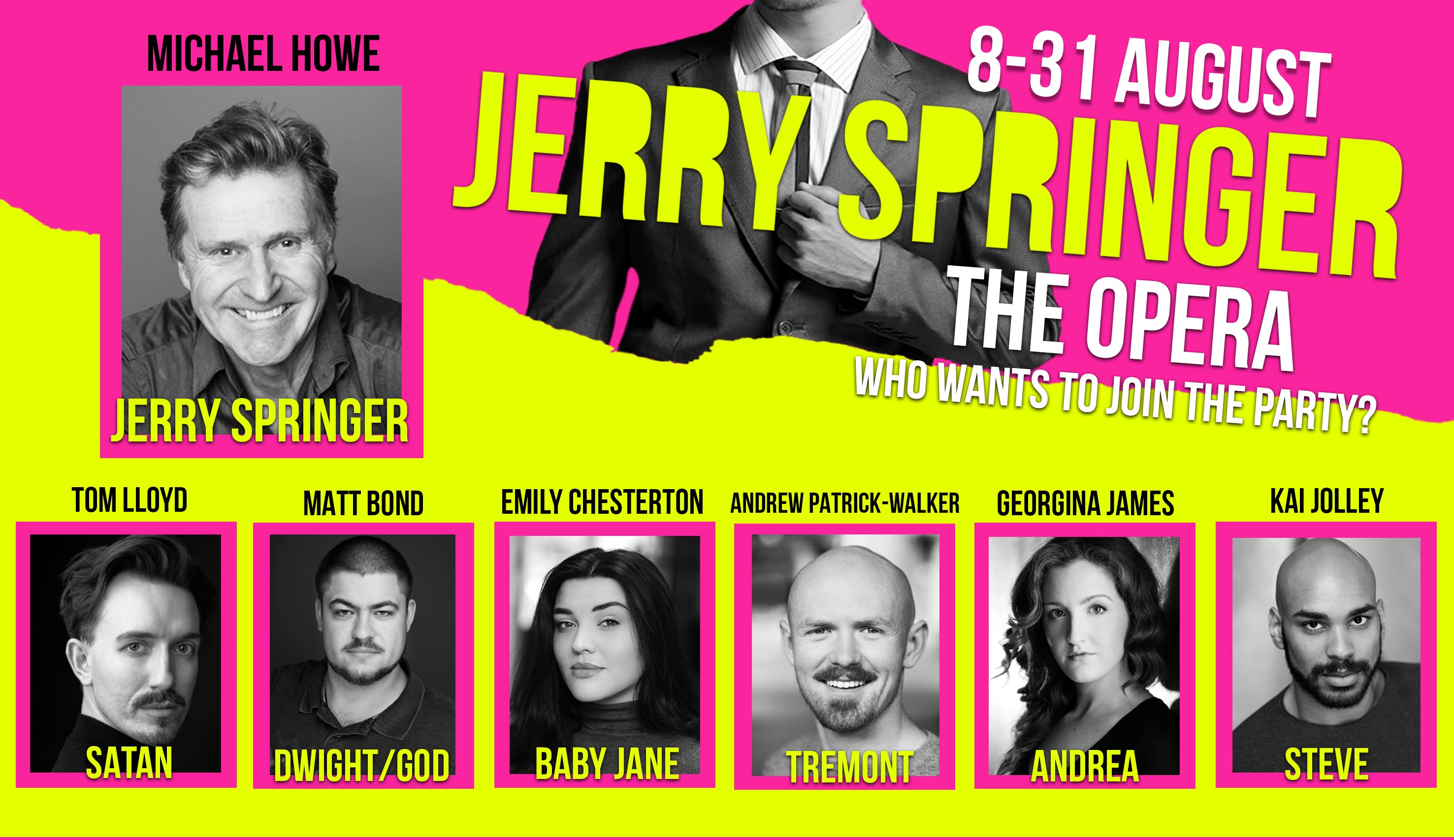 The creative team behind the long-awaited revival of Jerry Springer – The Opera have announced details of the first wave of cast.

The ensemble cast of Northern-based talent are tasked with bringing the smash hit cult show’s colourful characters to life on stage.

Jerry Springer – The Opera runs at Manchester’s Hope Mill Theatre, for four weeks from Thursday 8 August through to Saturday 31 August 2019. Tickets are on sale now.

The controversial show is being brought back to the stage by new production company Northern Ricochet, recently formed by James Baker (Parade, Yank), Tom Chester (Parade, Mamma Mia), and Bill Elms (Epstein: The Man Who Made The Beatles, The Ruby Slippers, Something About Simon).

It was recently announced that the hotly anticipated lead role of Jerry Springer will be played by renowned actor Michael Howe, who bears a strong resemblance to the television personality.

Matt Bond will play the roles of Dwight and God. Matthew studied at London’s Royal Academy of Music. His credits include Jekyll & Hyde; An American Musical Love Story; Sweeney Todd; and The Merry Widow.

Emily Chesterton from Salford is playing the roles of Peaches and Baby Jane. A graduate of LIPA (Liverpool Institute for Performing Arts), her credits include Bark! The Musical; Shout! The Mod Musical; and The Kissing Dance.

Georgina James will play the roles of Andrea and Archangel Michael. Since graduating in musical theatre from Mountview Academy of Theatre Arts in London,Georgina has been a lead vocalist in flagship show, An Evening With Sir Tim Rice, aboard the Seabourn Cruise Line. This is her UK theatre debut.

Canadian actor Kai Jolley is now based in Liverpool, he will play the role of Jerry Springer’s director of security Steve. An experienced actor, director, editor and award-winning production designer, Kai’s previous acting credits include Stop!..The Play; Violet The Musical; To Kill A Mockingbird; and ITILY.

Satan and Jonathan Weiruss will be played by Wirral’s Tom Lloyd. Tom recently played Leo Frank in the revival of musical Parade also at Manchester’s Hope Mill Theatre, for which he was named Best Lead Actor In A Musical by the Broadway World UK Awards. He has also appeared in Saturday Night Fever; Dirty Dancing; Singin’ In The Rain; Yank!; Joseph And The Technicolour Dreamcoat; and Rent.

Andrew Patrick-Walker will play the roles of Tremont and Angel Gabriel. His theatre credits include Bat Out Of Hell; This Is The Greatest Show; and Hair. Andrew has also appeared in films Spike Island; Muppets Most Wanted; and Misunderstood.

The cast will be led by Michael Howe in the role of Jerry Springer. Michael is best known from his television role playing Sebastian in the BBC series Solo alongside Felicity Kendall; as well as Mr Wilson the barrister in Hollyoaks.

The cast will be joined by a 14-stong Jerry Choir. The singers are from across the Greater Manchester region and will play an instrumental role in the show by supporting the cast of professional actors.

Northern Ricochet is the new production company bringing Jerry Springer – The Opera back to the stage after a 15-year absence.

Northern Ricochet are passionate about producing quality theatre in the North, for the North and using Northern creatives, actors and voices.

Director James Baker commented: “What a formidable cast we have to revive Jerry Springer – The Opera. When we launched Northern Ricochet, we knew that the North West was a hot-bed for talent, but we were totally overwhelmed with the calibre coming through auditions.

“Soon we will announce all 14 actors, bringing the entire company up to a total of 28 performers each night in the intimate Hope Mill Theatre, this is going to make one “hell” of a noise – we just can’t wait to bring the entire company together and start rehearsals to bring the show back to the stage for the first time in 15 years and continue making some raucous noise with a powerful heart for the audiences of the North West. I say “go, Jerry, go!”.

JERRY SPRINGER – THE OPERA caused a storm when it came to the UK stage in 2002, and in this new revival it promises the same raucous energy with a revamped and fresh production for 2019!

JERRY SPRINGER – THE OPERA was written by Richard Thomas, who also wrote the music and lyrics, with the book and additional lyrics by Stewart Lee and Richard Thomas. It is based on The Jerry Springer Show, which was first broadcast on television in 1991 and was on the air for 27 years. It tells the story of America’s favourite talk show host who suffers the worst day in his career when faced with some of the most challenging guests he’s ever met on set.