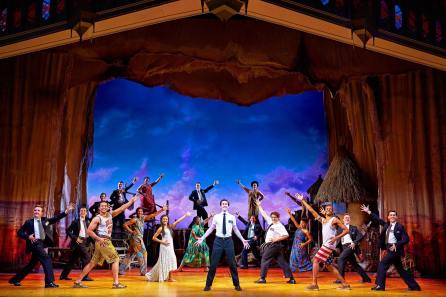 The stars were out in force, with Jenny mcalpine, Dave Spikey, Anthony Cotton and more local celebrities heading to the palace theatre for the opening night of Matt Stone and Trey Parker’s award winning show, The Book of Mormon.

The crowd were bubbly and excited, obviously the hype around this show was spreading. Erin and me sat and waited, munching on our chocolate in patient anticipation.

This is undeniably and obviously by the creators of South Park. The music, lyrics and style are so familiar, and they don’t shy away from the difficult subjects. Female genital mutilation, kidnap, murder, aids among other subjects, as brutal and honest as you’d expect from the writers of musical gems like “blame Canada” and “shut your f**king face, uncle f**ker”

But the fact of the matter is that the context of these real human tragedies and the apparent futility of missionaries in addressing real World problems is addressed in a very, very funny way, and with all the style of the best west end musicals!

The harmonies in the songs, the tight, consistent and fun dance routines and the overall showmanship on display have made this a really exciting and emotional experience!

There are some conversations I need to have with Erin now, as a few references did go straight over her head, and there was a lot of swearing, but it’s given us some opportunities to discuss real world problems, how we can develop empathy for other people and what practical things can we do that can help people. I’m glad I took her, but please, if you’re easily offended, consider leaving the kids at home.

Genuinely a 5* production, with a fantastic cast, hilarious dialogue and breathtaking musical score! I can’t believe it’s taken me this long to see it!

You need to see this show!!!