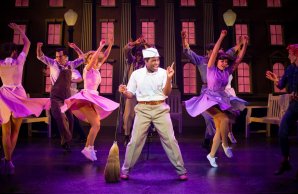 Back to the Future: The Musical Wow, just wow! Or should I say “Great Scott”

Turning up to see the famed Delorean time machine on the wet and windy streets of Manchester really set the tone for this show. Heading into the Opera House there was a buzz of excitement in the air, more than the usual amount of cosplayers were in attendance tonight. Erin thought a Doc Brown cosplayer was from Rick and Morty… she soon learned the reality of the Back to the Future franchise. Getting to our seats we were greeted with a futuristic music and rhythmic ticking, creating an atmosphere of anticipation and of an impending journey about to happen.

The stage was magnificent, with a digital screen replicating a sci-fi interface, and acknowledging #backtothefuture and where to use it on social media. There was an extended set though, with pulsating lights shooting around the edge of the stage, very reminiscent of the Tron films.

I’ll not bore you with the storyline, we all know about Marty, who’s mum fancies him, and he has to get her to fancy his dad again… (maybe that’s too simplistic) but the musical numbers just add to the original, era-defining story of Marty McFly. The costumes are on point, the music suits the story perfectly, and the actors… well! The cast was expertly brought together, with supporting actors in key roles, such as Mayor Goldie Wilson, Biff, Strickland, and the ensemble all playing an absolute blinder.

But if they were a great cast, the main antagonists can only be described as sublime… Rosanna Hyland as Lorraine McFly was exactly the right level for Marty’s mum, not too overbearing, and with good chemistry on stage. Hugh Coles as the hapless George McFly captures the essence of the movie character, his speech, mannerisms and the way he developed the role throughout the show was exquisite. We really, really wanted him to prosper, and win the girl! Roger Bart as the eccentric and lovable Doc Brown delivered a performance that commanded the spirit of the film. His sudden outbursts, the chemistry with his young, on stage, pal and the energy he brought to the part all harked back to the performance of Christopher Lloyd in the film franchise, and I can’t give higher praise than that!

His little dream jaunt into 2020 was a particular highlight for me, added value to an already strong storyline.

Finally, the main man, Olly Dobson as rock god Marty McFly. When he first spoke the theatre was in awe; they couldn’t have used the original audio from the film and had him sound more like the legendary MJF… His mannerisms, persona, and height all created the perfect package, and his performance was solid, lovable and relatable.

As for the show itself, I couldn’t write a review and not mention the excellent costumes and unbelievable sets and effects. The costumes were very detailed, and very close to the film version, with a lot of time and money obviously being spent to compile a wardrobe of quality for a show that is destined to run and run around the world. The sets were outstanding. With 80s Pepsi cans, cereal, TVs, and more all evident.

The Delorean was as perfect as I could have imagined. The effects were some of the best I have ever seen on a stage in Manchester, they made the Delorean and the cast do things that really sets this stage show apart from the other movie adapted musicals you might see. I won’t spoil it for anyone, but what you see in the movie, happens on the stage, and then some! (Doc Brown on the stairs is one of the many laugh out loud moments I will remember forever) I can’t rate this show highly enough, it has been an absolute pleasure to watch, to review and I really hope to see it again! Well done to the cast and crew, and here’s hoping for a mega run, you all deserve it!

Lastly, any chance of Back to the Future 2: the musical anytime soon? With the same cast. I genuinely can’t wait to see what the fx team do with hoverboards, flying cars, and smart houses!

Rating: 9.9/10 – it only lost a point because I wasn’t allowed to sit in the very expensive, very precious, very rare Delorean outside the venue!

Back to the Future, the musical runs until 17th May at The opera house,  Manchester. For more information and to book tickets click HERE